I wanted to share some details about the CDL test in Elk Grove Illinois DMV facility. I hope that they may be useful to other test takers. I took my CDL class A tests there without going to a truck driving school. I failed many tests many times because, first, I was busy with business and did not prepare enough, and second, because I did not understand what they wanted. While it was a very frustrating experience, it was a lesson on the value of being persistent and overall an enlightening adventure. It also gave me a great perspective on their office that I want to share here.

Be prepared for some mistreatment

First of all, most, but not all, test takers are mean and nasty. By that, I do not mean that they are strict, as they should be, but that they are extremely rude, inconsiderate and purposely annoying. There is a couple of females there, barely able to climb into trucks, who can only be described as "evil witches". There are other examiners who are better. Having lived in the USA for 20+ years, I came not to expect that sort of treatment, but it is what it is.

You can take those last three tests on separate days or pass some and fail others. The ones you pass count the next time you come.

About pre-trip: all you have to do is memorize what the book says. They always ask: tell me about tires, tell me about brakes, tell me about suspension. Be super prepared on these questions but be ready to discuss anything else. I was able to pass it only after spending several hours memorizing and repeating aloud all pre-trip lists from the CDL book. You have those lists in chapter 2 (driving safely) and in the pre-trip chapter.

Then it goes on to testing the air brake emergency system. You have to be able to show them the "fan-down", as they call it, and not make any mistakes. Fan-down, what a stupid name, refers to letting out air by repeated use of brakes, and seeing the low air buzzer and valves popout (see book). You have to demonstrate it perfectly. If you pass the pre-trip test once, you do not have to pass it again.

The skills test at this facility involves only the following: straight line backing, conventional parallel park, and offset backing (left). For conventional parallel park, they set up cones that limit the area that you can use! They are making it very hard! The examiner that I had, made conventional parallel park test extremely difficult by only allowing about 7 feet over the length of my tractor trailer. The ONLY reason why I passed it was that I practiced this very maneuver for like 12 hours over several days. I knew that it was coming. At least in my age (45) I would not have been able to get it mastered any faster. They give you two pull-ups on the parallel park, use those. They give you one pull-up on offset backing, which you should also use. This pull-up can essentially turn offset backing into a very easy straight line backing if you pull up by a lot.

The road test route is as follows: exiting the CDL facility, turn right on 72/Higgins. Then turn right on Landmeier. Then turn left on Rt. 83. Left again on Pratt. Left again on Nicholas. There is a railroad on Nicholas, make sure to point that out and not shift gears on the railroad. Left one more time on Lunt (and NOT on Greenleaf as the map says). Right on Rt. 83. Right again on 72/higgins, right immediately after that and return to the test facility. I practiced driving on the route on Sundays for many hours. This really helped me to be comfortable on it.

I came for the road test on another day because the examiner refused to ride my truck due to broken seatbelt on the day when I passed my skills test. The road test is very special. It is not enough just be a great truck driver. (and it is not necessary to be a great truck driver). You have to drive in a very specific way that is a crazy hyper-defensive style of driving. That makes examiners happy and that you would never guess.

The test drive route itself is very easy in the sense that most turns are wide, and most roads are mostly empty of traffic. The only hard turn that you have to really watch for is the turn back into Roppolo returning to the CDL facility. The two difficulties are that it is a blind turn, you do not see until you pull up. So pull up slowly and be ready to stop completely and wait for any cars to clear. Second, it is a hard turn, and you need to do the "button-hook" to turn into it.

Of course, once your truck driving career starts, you will be speeding, float shifting, shifting on intersections, coasting etc. But not on the test. 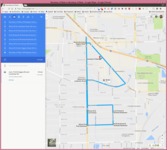