At an auction site where I had some work today, there was a huge crane fail. A 60 ton crane was lifting a giant silo through an narrow area. Something or other snagged, the boom became overloaded, and it buckled. The large tank fell in, only partly, and is now a hazard in itself. No doubt the damage is in hundreds of thousands. My best guess on the cause, is that during the lift, a part of the tank somehow got snagged by some roof or wall elements and that caused the overload. And the problem with cranes, is that they work at a great height and an incredible amount of energy is suddenly released. 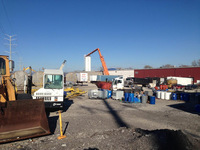