A company paid me a good amount of money to remove three safes, two of which were locked closed without combination. This page describes my attempt to open one of them. I want to open it for fun and in hopes of finding something valuable. The company already made a lame attempt to open it by cutting hinges (!)

I decided to make an opening on the side near the lock. I used an angle grinder to open up the outer skin, then broke the gypsum material, then cut through the inner skin and another inner shell.

A view of the lock opened up. By now I have removed two screws (out of four) that hold the back lock cover. Had to go home. 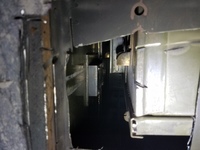