This is a robot that my son and I made for the State robocross competition. It won 1st place in Illinois level competition in April 2015. It competed with over a dozen of Vex Robotics "easy to assemble" kits and won over them all.

Since the state competition is so important and there is a chance for him to become semi-famous if he wins it, we decided to make another robot.

Anyway, if you look at the controller, you see that there is a rechargeable battery attached on the bottom, and a black heatsink attached to the top.

There is a hole in the plastic box where the heatsink attaches, and in that hole, there is three positive voltage regulators. I got the heatsink from a old power supply that I got from obsolete equipment removed in Chicago. One for 10v to drive the lifting arm, and two 5v regulators to drive tracks. The reason for using different voltages is that 10v is too much for the tracks, the robot becomes not controllable.

The robot itself is intentionally made to work like a skid steer loader like Bobcat T300. (I own a S300 myself).

The competition itself allows only 3 minutes driving time.However, he will spend hours preparing for the competition, and so, the robot needs to be heavy duty enough not to fall apart or burn out during practice.

The bucket is just like a bobcat bucket. I sharpened it on my Boyar Schultz 6-12 surface grinder to give it a super sharp, super straight edge.

The good news is that, as they run, even after a while, the heatsink is only barely warm. I had an undersized heatsink (a small copper bar inside) before and it would get very hot. But with this aluminum heatsink, everything is nice and cool.

Overall, a big part of why he won is not just that the robot was good, but also that he spent many hours practicing.

I am thinking about lecturing him about some "life lessons", like if you work hard at some good idea for a while, you can kick everyone's ass, or something along these lines. Something that certainly was true in my own business. 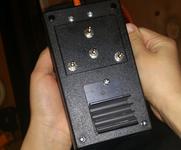