These pictures show how we took down a 5 ton bridge crane. This is a Whiting trambeam "double girder" bridge crane. I took down both the crane,as well the rails. The crane was 36' span and about 10' wide.

To take it down, we first took down its hoisting unit. Fortunately we had a forklift that could reach that high, as the hoisting unit was underslung. However, after the hoist was removed, everything else was beyond the forklift's reach and unsafe to take down with forklifts.

To take down the bridge, I suspended it from the ceiling using two chain hoists and two beam clamps that I had. I choked it in chains so that it would not slide. I also put 1/2" bolts through the chain, near the hook, so that it would not slide in the hooks, leading to overturning of everything. I could let it down about 10 feet on both sides. After that, I could take down one side with a forklift, then another side.

Overall, taking it down was a pain for the following reasons: 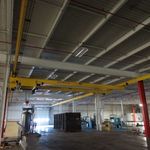 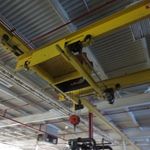 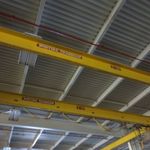 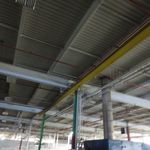 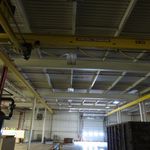